How to turn success into a legacy 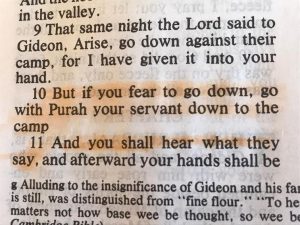 You may know the story of Gideon in the Bible. We immediately picture him as brave, fearless, and strong,  the words “mighty man of valour” spring to mind!

However Gideon had very low self esteem, was fearful, insecure, and was trying to hide when God sent his messenger to tell him he would save his people.   He even described himself as a nobody from the poorest clan, the least in his family, not recognised by anyone for anything!  However he discovered that God had a  better opinion of him than he had himself.

His job was to figure out (with God’s help)  how to get rid of the enemy that was raiding his family’s crops, and restore the economy back to those who had worked hard.

God asked him to go into the enemy camp and there he would be strengthened for the job! (yeah right!) He was afraid. (Fair enough too I say!)

God had a great suggestion… ‘If you are afraid, take Purah yourservant with you ‘. It is always good to have someone you trust with you, when you are facing big issues.

Do you have a Purah in your life?

Business Edge was founded on the principles of Pastoral Care and Support, Mentorship and Encouragement. Professional Isolation is a big issue particularly  as entrepreneurial business owners and leaders who hold a Christian Worldview.  Business Edge came about to fill that gap, to celebrate your success, and to encourage you to greatness even when things look unfruitful at times.

Go to https://www.businessedge.org.nz  and join a group who are connected daily by prayer and pastoral support.

” The Lord is with you, you mighty person of fearless courage” Judge 6: 12

Have a great week     Blessings Coralie